I rolled in this afternoon/evening after I had left over turkey, lumpy mashed potatoes, green beans and cranberries(whole ones) followed by pumpkin pie with that pressurized whipped cream…… I was gonna enter something profound and highly literal and kaboom, I suddenly realized it had been five months since I had been here…. So here goes ladies and gentlemen……

I have been working because we are considered mission essential. I know some folks who are not that lucky especially given the edicts of our not so esteemed governor, Greasy Gruesome Newsom. He is a reason that makes a repeat of 1776 a rather splendid idea at times………

We had a bit of a stressful event at Eddie’s Airplane Patch relative to the 412th AMXS in the July-August time frame that did cause some consternation in the unit. In a nutshell it was a possible contact with a possible contact of a confirmed case in a member’s family. To several of us it was an option to get the quick nasal check for the said China Virus. My flight chief at the time was sort of pushy about me getting it done. He worried about me due to my age and the fact that I have had some health related issues and having had cancer being one of them. I wound up being placed on administrative leave from Mid August to Mid October. Full pay and regular leave and sick leave still being earned. At least Missus ORPO and I were able to take a trip to Wichita, Kansas for the First Birthday of our Grandson, Grayson Austin Green. Add in that your humble Crew Dawg was also rolling Sixty-Six in that time period. My New Flight Chief was in a bit of a tizzy when he was informed about said vacation. I had already forecast it in January before he moved into his current position. I don’t even think I got charged the full amount of leave. Missus ORPO and I had a splendid time with the family.

I also had a fun event in August that required my old friend, the prep. You know THAT PREP! I also had the endoscopy done and that was a first. Polyp in the transverse colon and rectum, both of which were negative on the biopsies. The upper tract had some items that also had biopsies done and those were negative as well. The diverticulitis is there and it is being dealt with as I would prefer the surgery to be done after I retire at Edwards and we return to Kansas. Then I will have all the time in the world.

No Hockey yet. Supposedly the AHL is going to start the new season next week but no one knows anything because the above named elected official is being his usual 24 carat ass wipe self…….

There, caught up, I think. I am still thinking on whether or not to keep ATJT going or not. I am up against the free amount expiration soon. I have considered doing the Pinch Paisley thing and just calling it good because of the social media thing taking over.

The coworkers were all for me going home with the hacking I was doing.

Can’t say as I blame them.

Got the Kings at Oilers game on so that helps……………..I love hockey. 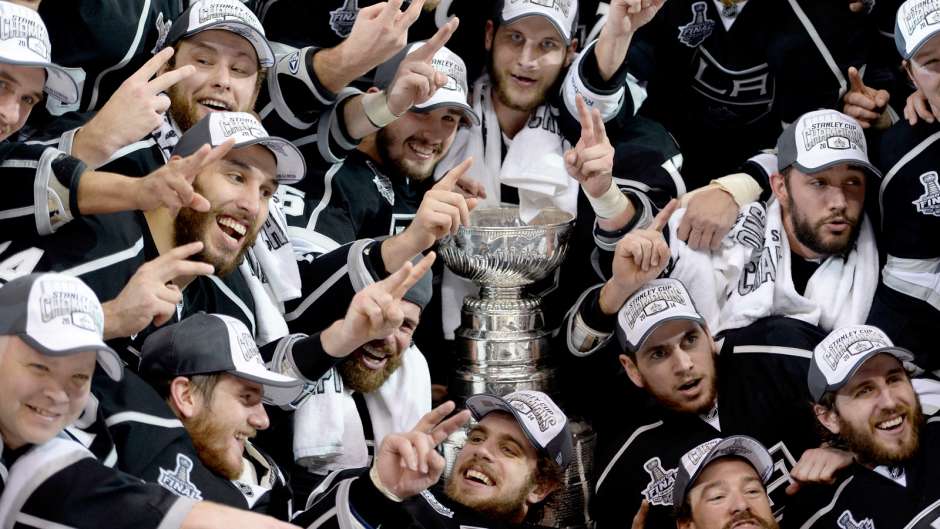 It is a very good day here in this part of California. Second one in three years………..

Missus ORPO and I went to see the Bakersfield Condors play the Stockton Thunder in game 2 of a best of 7 series.
Condors won by a score of 2 to 0. They lead the series 2 games to none! 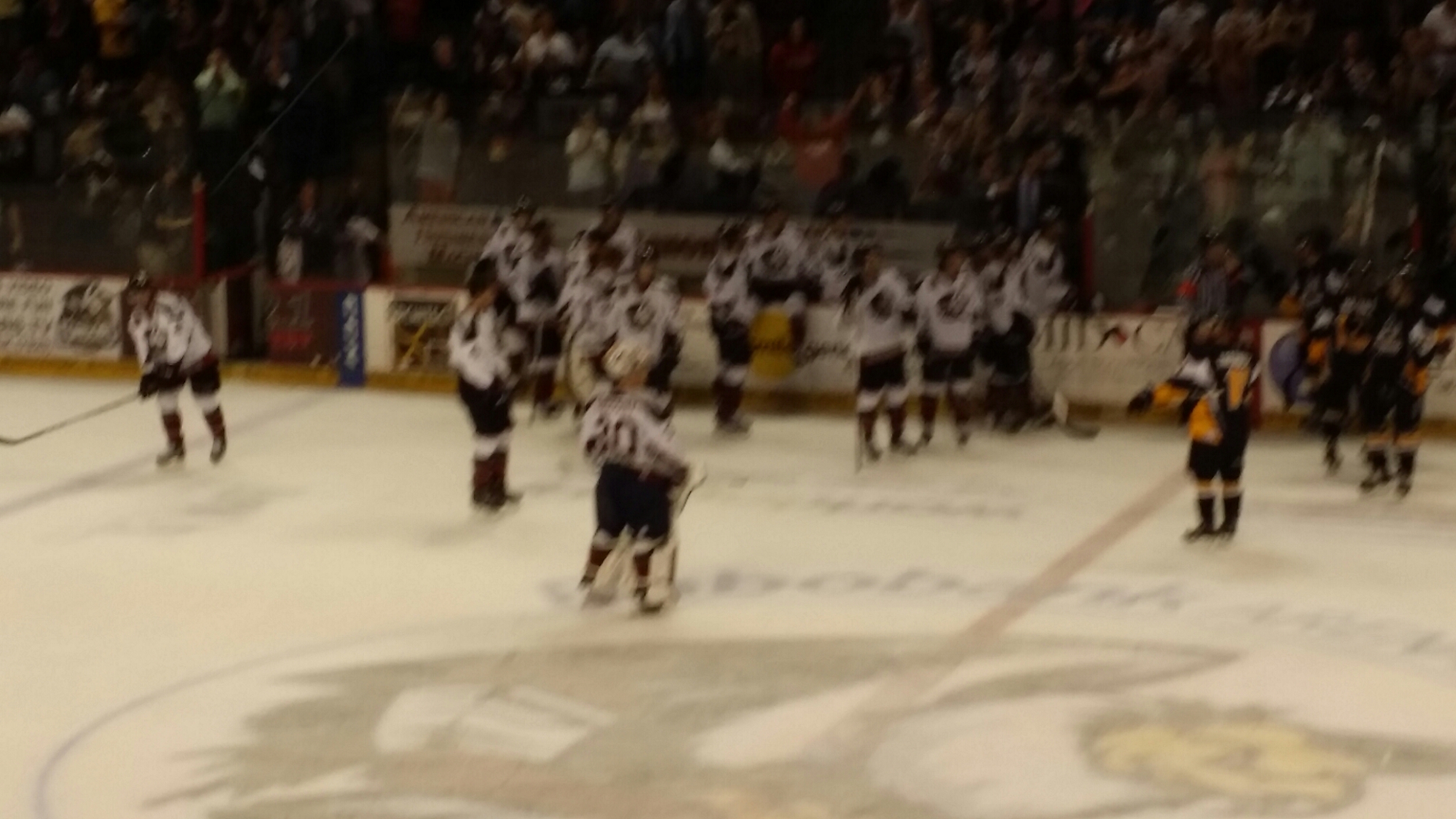 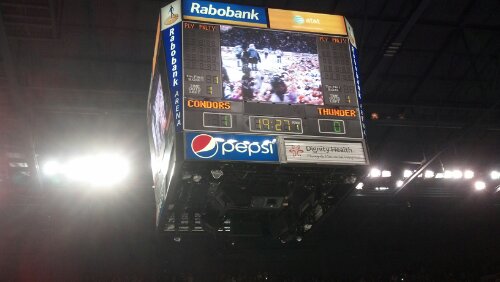 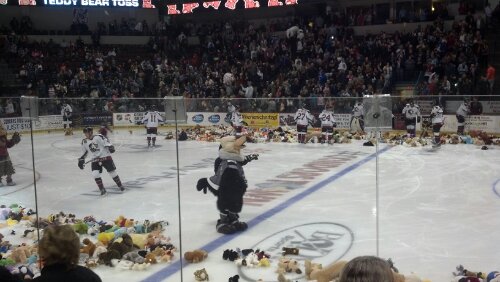 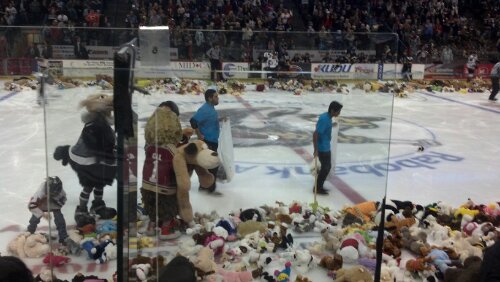 This is a yearly tradition for the Bakersfield Condors. The opponent was the Stockton Thunder. The Condors scored at :33 of the first period and stuffed animals hit the ice! The final score was Bakersfield 6, Stockton 3!

The weather in The High Desert today………….it was ugly.

Thunderstorms on the Field.

I had to wear my parka. I have had my first week since I began here almost 2 & 1/2 years ago of not being on the line. It was all on my jet in the hangar for an airframe inpsection with the engine removed.

The old hangars leak cold air and in some spots, water.

Interesting day to say the least.

The higher elevations were under a winter storm warning……………….they got it………………….it was snowing on The Tehachapi when I was coming home today……….

Doing up a couple of tuna steaks an julienne potatoes for supper.

Got Penguins and Flyers on, game two of that series. Kings at Canucks later.

Because it’s the Cup.

Pond Hockey on a grand scale. But outside where so many of us learned to play Our Game!

From my good buddy Wyatt at Support Your Local Gunfighter.

If you are a hockey fan, this hurts us all. Some greats were on that airplane. Pavel Demitra for one.

Brad McCrimmon who was a Philadelphia Flyer.

This one is up there on the stupid scale. Sort of like the NCAA persecution of the University of North Dakota Fighting Sioux.

Yup. Four to nothing. Jonas Hiller only had to stop 12 shots.

The Ducks are now in first place in the Pacific Division. Ahead of those evil Dallass Stars!

Jonathon Quick got the shut out with forty saves!!!!!

The link is to the review at http://www.nhl.com/index.html

The score after two was Canada 3, Russia 0. Five unanswered goals in the third to win. Gotta hand it to them. That kid Kuznetzov is pretty dang good from what I saw.

WICHITA, KS- The Wichita Thunder outslugged the Tulsa Oilers 7-6 in their preseason opener at the Wichita Ice Center on Friday night.

Five Thunder players had multi-point games, including Jesse Bennefield who netted two goals and an assist.

Bennefield earned credit for the eventual game-winning goal, hitting an empty net from the left point at 19:04 in the third period.  The score gave the Thunder a 7-5 lead, but the Oilers pulled within 7-6 on a close-range shot from Matt Larke with just over 11 seconds left in regulation.  Wichita recovered defensively and closed out the win, highlighted by Lance Galbraith’s aggressive block of an attempted outlet pass.

Rusty Masters gave Tulsa a 1-0 lead just over three minutes into the game.  Masters snuck a rebound in front of the crease past Thunder goaltender Ian Keserich.

Peter Stevens tied the game at 9:13 when he tipped in a rebound past Oilers’ netminder Sylvain Michaud.  Wichita took its first lead of the night excatly three minutes later on Bobby Hughes’ shot from the slot.

The Oilers tied the game at the 14:37 mark in the first, but the Thunder regained the lead 21 seconds into the second period on Bennefield’s first goal of the night.

The teams traded goals twice more until the Thunder snagged the lead for good at 3:29 in the third when Chris Falloon took advantage of a breakaway and fired a shot from the right hash mark that beat new Tulsa goaltender Tyler Sims to his left.

Falloon also had two assists in addition to the goal, while Hughes and Brent Cullaton each scored a goal and an assist.  Matt Hubbauer chipped in three assists for the Thunder.

Ryan Hand and Jason Goulet each picked up fighting majors.  The Thunder outshot Tulsa 39-32 for the game.  Wichita did not score seven goals in a game at any point in 2009-10.

Washington 6, Montreal 5. That kid Backstrom with the Caps got the winner. Thirty one seconds into the OT period. It also got him his Hat Trick. The Caps finally played up to the overall one seed as advertised. In game one, Alexander Ovechkin did not get a shot on goal. Last night he got a goal and three assists. Could be a short playoff for my Habs.

Out here on the Left Coast, the LA Kings evened it a one game a piece with the Vancouver Canucks. Anze Kopitar got the OT winner. Both games in this series went to the OT. This could be a classic series. Especially with the Kings stealing one in Vancouver. Just for you Little Lulu!

About your humble author

And then one day you find ten years have got behind you. No one told you when to run, you missed the starting gun.

Reflections of My Life

"Sign on, young man, and sail with me. The stature of our homeland is no more than the measure of ourselves. Our job is to keep her free. Our will is to keep the torch of freedom burning for all. To this solemn purpose we call on the young, the brave, the strong, and the free. Heed my call, Come to the sea. Come Sail with me." -- John Paul Jones

Visitors since the beginning

Political Correctness is a doctrine, fostered by a delusional, illogical minority, and rabidly promoted by an unscrupulous mainstream media, which holds forth the proposition that it is entirely possible to pick up a turd by the clean end.

Thought for the times

"We make men without chests and expect of them virtue and enterprise. We laugh at honor and are shocked to find traitors in our midst. We castrate and then bid the geldings to be fruitful." CS Lewis

Newt Gingrich on the qualifications of Obama

"As an American I am not so shocked that Obama was given the Nobel Peace Prize without any accomplishments to his name, because America gave him the White House based on the same credentials."